Premier Su Tseng-chang (蘇貞昌) earlier in the day visited Sijhih to hear a report on plans for the line.

While there, he thanked former minister of transportation and communications Lin Chia-lung (林佳龍) for facilitating the plan and incumbent minister Wang Kwo-tsai (王國材) for taking over the project. 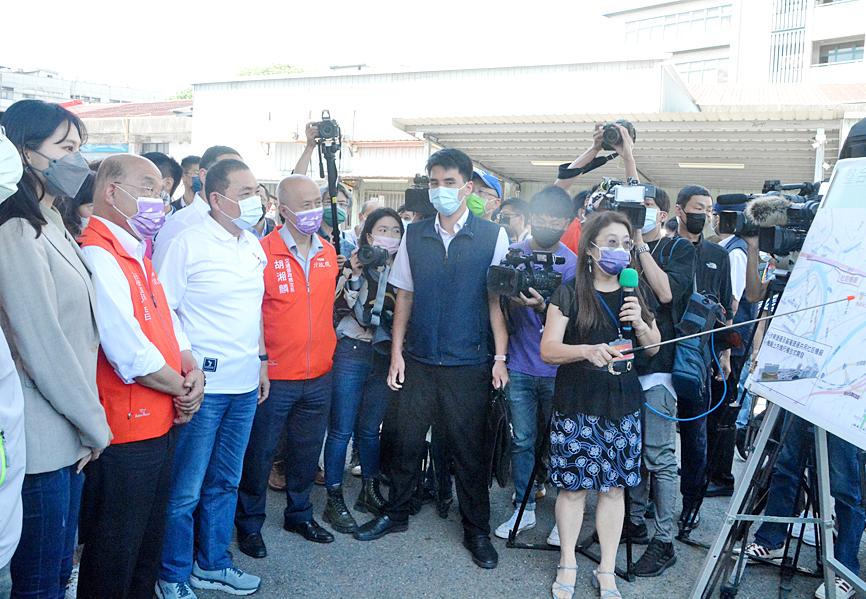 “Thanks to the understanding and cooperation of the mayors of Taipei, New Taipei City and Keelung, we have made some progress today,” he said.

The department said in a news release yesterday that the transport ministry preliminarily approved the plan for the Sijhih-Donghu Line in March and the city government submitted a revised plan in May to the Executive Yuan for review.

The line can improve transportation problems in Keelung, and share stations and the Shekou terminal with the Keelung MRT Line, it said, adding that the government hoped the Cabinet could approve the plan as soon as possible.

Lin, who is the Democratic Progressive Party’s candidate for New Taipei City mayor, on Facebook yesterday thanked the premier for announcing in February that the government would prioritize the construction of the Sijhih-Donghu Line.

Sijhih is an important intersection connecting Keelung and Taipei, he said, adding that local residents and commuters all suffer from the postponement of the line’s construction.

While the originally proposed MRT Minsheng-Sijhih Line was postponed for years, as the Taipei City Government prioritized the Metro circular line, the Sijhih-Donghu Line made no progress., he said.

While serving as transport minister, he found that the overlap between the Keelung MRT Line and the Minsheng-Sijhih Line made it difficult for all parties involved to reach a consensus, he said.

The efforts resulted in the integration of the east side of the Minsheng-Sijhih Line — which has been named the Sijhih-Donghu Line — and the Keelung MRT Line, he said, adding that this would benefit nearly 1 million residents in Keelung, Sijhih and Taipei’s Neihu (內湖) and Nangang (南港) district.

The planned Sijhih-Donghu Line can connect the Wenhu Line (文湖線) and Bannan Line (板南線) to further facilitate transportation in the Taipei metropolitan area, as well as stimulate the development of Keelung and Sijhih, he added.

Comments will be moderated. Keep comments relevant to the article. Remarks containing abusive and obscene language, personal attacks of any kind or promotion will be removed and the user banned. Final decision will be at the discretion of the Taipei Times.

Story at a glance Rep. Marjorie Taylor Greene (R-Ga.) on Friday introduced a measure that would make it a...

In a feverish House race across Manhattan, a dark-money super PAC has spent more than $200,000 reminding voters that...

The consequences Trump could face for mishandling White House records

Tai noted anti-dumping and countervailing duty tariffs fall under the purview of the Commerce Department, "but I think it's...

McConnell warns GOP may not win Senate, as group linked to him invests heavily in Ohio

Comment on this storyCommentSenate Minority Leader Mitch McConnell (R-Ky.) is warning that the GOP may not win back control...