In a city where “it” spots have changed as often as a South Florida weather forecast, Rusty Pelican remains the heaviest of hitters. So much so that the Rickenbacker Marina waterfront restaurant, lounge, and lushly-landscaped event hot spot celebrates its 50th anniversary this month.

“Everybody is a local to us here,” said Derrick Badenhorst, managing director of the property and employee for four-plus years. “We have the folks that come in and tell us they are married and came here on their first date. We’ve seen our share of mayors here. And, we have a guy that comes down the road Friday for a drink and cycles back home. Through weekly rituals and events, we have our regulars for sure.”

Rusty Pelican first opened its doors in 1972 under the ownership of David Tallichet with a Polynesian vibe and cuisine as well as a panoramic patio overlooking the City of Miami. “From the beginning,” says Badenhorst, “we’ve had one of the best locations in the country… Key Biscayne, Brickell, and the city skyline are all visible right here.”

The original menu featured favorites like a teriyaki-glazed sirloin steak, Chicken Kona Kai (grilled chicken served in a pineapple with sweet and sour sauce), and Cherries Jubilee (simmered cherries, vanilla ice cream, and Chantilly liquor). Beyond its views and fare, Rusty Pelican gained even more notoriety after being featured in the 1980 blockbuster Caddyshack, starring Bill Murray and Chevy Chase. 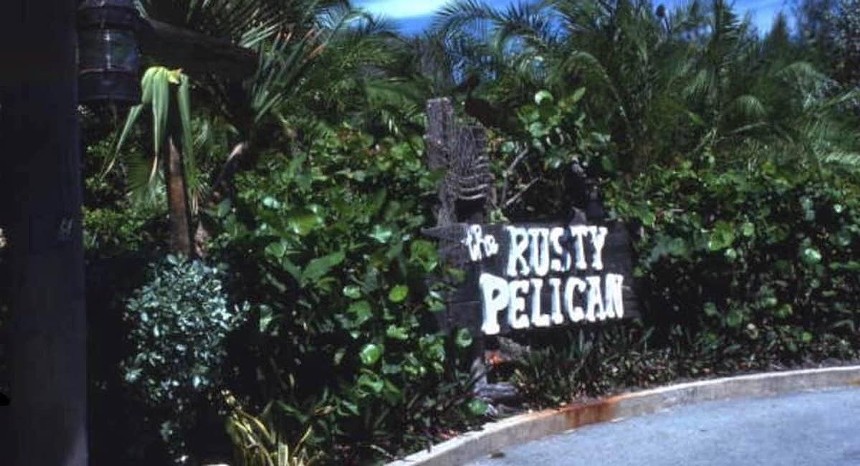 The entrance of Rusty Pelican circa 1980

In 1984, the tides shifted for the worse. A fire, sparked by faulty wiring, led to the building totally burning to the ground. The rebuild took nearly three years, and in July of 1987, Rusty Pelican reopened, this time with a second-floor event space that has become a quintessential Miami gathering spot.

On events, Badenhorst says the vibe at Rusty Pelican remains, “we can make anything possible in this restaurant.” He adds, “Our mentality is very much that this is our home, and we are welcoming people to our place for an experience they can’t get anywhere else.”

In 2011, the restaurant underwent a $7 million renovation, solidifying its current modern-meets-chic vibe and dynamic event spaces. Among them — and beyond its wine wall entry — are the dedicated dining room with seating for 200-plus, the lounge/bar that can accommodate 100, and the second-floor event space and convertible ballroom with a 500-guest capacity.

“On a weekly basis, we’re now doing 15 to 20 events on the property,” says Badenhorst. As for some of the standout events in recent times, he says hosting Miami International Boat Show festivities was quite an operation, as well as an $80,000 fairyland-themed quinceañera. Vistas like few others await on the property’s terrace.

Among the staff’s favorite event moments have been the more intimate requests, like semi-impromptu proposals from the vista terrace and a recent 101-year-old’s birthday gathering.

Five decades in, and with David Tallichet’s son, John, running the show, several chef-concocted dishes have become faves. These include the chilled seasonal oysters, Chilean sea bass with a smoked sweet plantain mash, short rib empanadas, and seemingly any seafood known to man that’s often presented in a show-like fashion. And let’s not forget the booze, which includes classic martinis and handcrafted cocktails with flowers on top and/or a smoky presentation.

Amid the staples and an anniversary worth celebrating (ahem, the City of Miami just proclaimed August 26th as Rusty Pelican Day), this spot…

SAN JUAN, Puerto Rico (WABC) -- Puerto Rico is getting help from the Tri-State area in the aftermath of...

Officials celebrated the grand opening of a 16-unit family bridge housing project in Baldwin Park Saturday that will cater...

Autumn’s coolness goes on for a second day in Washington

Obviously, the arrival of the autumn equinox on Thursday night has influenced the centers of meteorological power. Since fall...

Priest sex abuse: 3 retired priests being investigated for allegations from half

CHICAGO (WLS) -- Three retired Chicago area priests are being asked to remain out of the ministry pending the...

Trump Feared Only What He Himself Had To Lose With ‘Murderous’ Election Move: Witness

“She Said Something About The Baby”

Google Fires Another Top Researcher on Its AI Ethics Team